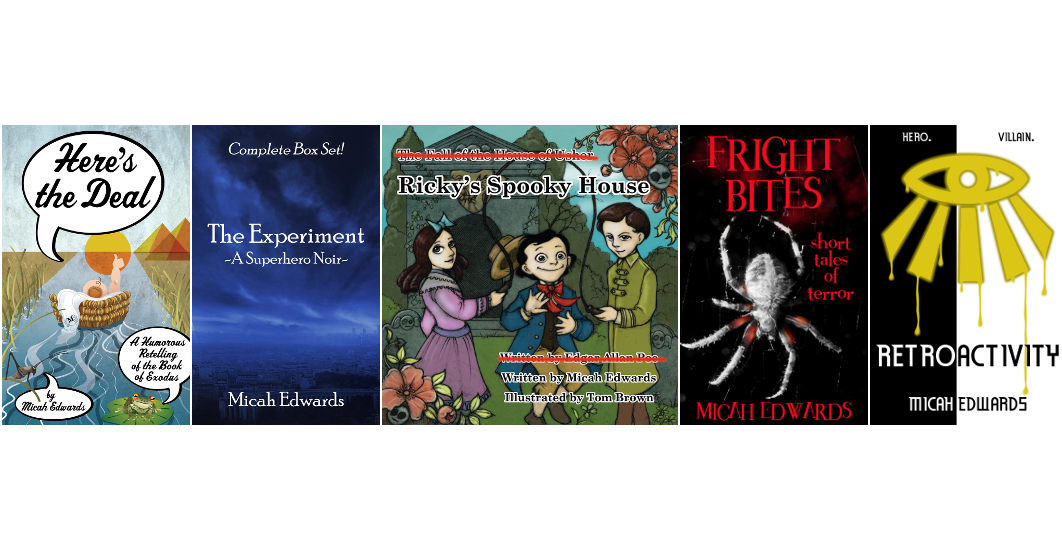 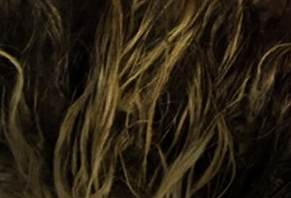 We called it The Deef. It was supposed to be a joke.

We had a game, the group of us. It didn’t really have a name. It was just the cryptid game. It was simple: every time we got together, one of us had to share a monster story. That was basically it. We’d started it back in college, and just sort of never stopped.

There were more rules than that, of course. It had to be original. No more than one story introduced per get-together. Whoever had the best monster was winning.

All of these rules were unspoken, but we all understood them. They’d evolved over the years to create the friendly rivalry of the cryptid game. It kept us in touch, gave us something to talk about when we saw each other. And it was always fun to hear someone else reference your monster, either in a new story or just in standard conversation.

I made up a bunch over the years, most of them ridiculous. The Cord Goblin, an obnoxious electrical creature that can travel through wires, and which ties unattended cords into knots. The Skulk, a gelatinous creature the color of seawater which lurks in the ocean and generates that unpleasant pulse you sometimes feel when you realize you have no idea what’s below you. Halitus, a bent shadow which breathes into your mouth at night.

I was rarely winning the game. But every time I went swimming in deep water, I thought about the Skulk, and I know the others did, too. That was all I wanted out of the game: to give my friends the “man, what if…?” moment.

The others took different approaches. Jennifer just went with whatever news article she’d happened across at the time, spinning it into something unearthly. Alex, too, was all over the map, with no clear thread between any of her creatures.

Rebecca, on the other hand, always started her stories the same way: “Deep in the unexplored jungles….” She was big on lost tribes and creatures forgotten by time. Less likely for anyone to think about on a daily basis than mine, but more likely to actually be real. Well, more possible, anyway. “Likely” is a bit of a stretch.

Emmanuel liked insects. Psionic beetles that lived in the roof beams of houses, putting out stressful emanations and feeding on the resultant fights and negative emotions from the families below. Gnats that laid eggs in tear ducts so that the maggots could wriggle their way into the sinus cavity, hiding safely and feeding off of the mucous until they grew into their adult form. His were usually good for a serious shudder, more so if you had a particularly vivid imagination. They weren’t out of the realm of possibility, either. Bugs and parasites have some weird life cycles, and some terrifying adaptations.

And Connor—Connor liked predators. Big things, scary things, things that moved among humans, hunting them. His creations were responsible for the lost pets, the missing children, the runaways. Like Rebecca’s, his stories always started the same way: “Och, so picture this thing!” He had a rich Scottish accent which somehow gave his monsters more vibrancy, more life. They were the least likely of our stories, because they were the sort of monsters that someone would had to have to noticed by now—but when you were alone in the darkness, logic like that didn’t matter. That’s where Connor’s stories would always come back to haunt you.

If he had a failing, it was that his cryptids never had a name. They were always just “this thing,” which left it up to the rest of us to name. We would invariably come up with the most ridiculous name we could think of, undercutting the story. He told us one about a underground hive of man-sized wasps, networked across miles. They would steal cavers and solitary hikers, dragging them down to serve as food and hosts for the larva. Connor was waxing eloquent about the hive structure when Rebecca suggested that we could call them Beests, and we all broke up laughing. Even Connor was a good sport about it.

The Deef was another one of his, a fairly recent one. It was something like a giant boar—och, picture this thing—only with the grace and speed of a tiger. It stood five feet high at the shoulder, and its mouth could unhinge like a snake’s in order to scoop up its prey and capture it in a gnashing cavern of knives. It once lived in forested areas, but as civilization expanded, it found richer hunting grounds in cities.

It evaded detection, Connor told us, through its speed and sleekness of motion. Despite its size, it could slide undetected into alleys, behind cars, in any of a thousand overlooked urban hiding places. It slept during the day and hunted at night, when its dark coat provided camouflage in the darkness.

The most terrifying thing about it, though, was that it absorbed sound. Things grew quieter when it was nearby, dropping to utter silence in its immediate presence. You might never see it coming, but you would know it was there right before it took you, because you would feel like you’d gone completely deaf.

“Deef?” I had asked, mimicking Connor’s brogue, and Rebecca exclaimed, “The Deef!” Connor rolled his eyes at us and said, smiling, “Fine, the Deef, you reprobates. Call it whate’er name you like. You won’t be calling it anything when it comes for you.”

Absurd name or not, though, the Deef was one of his best ones. It stuck with me strongly. I could picture its thick, bristly fur, see its bloody snout with the expandable lower jaw. I could even visualize the way its flanks would heave as it ran, streaking silently down city sidewalks in pursuit of prey that had no reason to look behind, no idea that anything was there at all. The Deef kept me looking over my shoulder for weeks after Connor introduced it.

It wasn’t just me, either. Emmanuel confessed that he’d started using his flashlight on the walk from his car to his apartment building, in case the Deef was concealing itself in one of the shadows.

“I don’t really think it’s there, obviously,” he told us. “But then again, it doesn’t cost me anything to turn on my phone’s flashlight.”

And that was exactly it. Obviously it wasn’t real. But at night, alone in the dark—what if? That was the fun of the cryptid game.

Except that the other night, I was texting with Alex while she was walking home from the corner store.

Quiet night out here, she texted me. The city’s so different at night.

Yeah, I sent back. Whole different animal once everyone goes to sleep.

It’s even quieter than usual tonight.

Haha, yeah. Buncha shadows, too. Could definitely be a Deef around.

That was a few days ago. Emmanuel called me yesterday morning to ask when I’d last talked to Alex. I checked my phone and saw that that was the last conversation we’d had.

“Yeah, no one’s heard from her since then,” he said, sounding worried. “I’m going out looking for her after work today. Come help me? We’ll go from her apartment to the bodega, see if we can find anything.”

“What are we looking for?”

“I don’t know, anything! She’s missing!”

I assured him I’d come help. After work, we met up by her apartment and started walking. I still had no idea what I was looking for. The streets looked like streets. There was trash, graffiti, paint, dirt—the usual. Emmanuel and I did a slow walk to the store, scanning every alley as we went. By the time we reached the store, the sun had dropped behind the buildings.

“Now what?” I asked Emmanuel.

“Check again on the way back, I guess. See if we missed anything.”

I thought about pointing out that if we hadn’t seen anything earlier, we certainly weren’t going to now that it was darker. But he had a desperate look on his face, so I shut up and we started the walk back.

“What are you doing?”

“Shut up!” someone yelled from an apartment above us, and I ushered Emmanuel on.

At the next alley, though, he called out for her again. “Alex!” There was no answer, obviously. Even he knew there wouldn’t be. It was written on his face.

This went on for a few blocks. With only two more blocks to go, Emmanuel’s shouts were starting to sound hopeless. “Alex,” he called out, but he was barely even bothering to raise his voice now.

“Maybe we can—” I began, but stopped dead. I could barely hear my own voice. Emmanuel and I turned toward each other, the same realization hitting both of us.

I saw it then, looming out of the alley behind him like a striking snake. It came from nowhere, seeming to rise out of the bricks themselves, standing nearly as tall as us, its mouth already gaping open in anticipation of its meal. Its hooved feet skimmed silently across the ground as it raced towards us. I tried to call out, to warn Emmanuel to move, but not a sound emerged from my throat.

It took Emmanuel behind the knees, knocking him over to land, flailing, in its massive mouth. Powerful muscles flexed and the jagged pouch closed around him. It convulsed, crushing and grinding Emmanuel inside. I could see the bulges where his body distended its gullet.

It swallowed, and the throat tightened. Swallowed again, and it grew smaller still. A third time, and it was back to normal size. It had consumed Emmanuel in seconds. He was gone, not even a drop of blood remaining. And all of this had happened in total, horrible silence.

Its meal finished, the Deef lowered its head and looked me directly in the eyes. I saw hunger there, but after a moment of regard it melted away into the alley. I never blinked, but still I lost sight of it within seconds.

I don’t remember how I got home last night. I don’t know why the Deef let me go at all. But I remember the look in those eyes, and I know that I’ve been marked.

The sun’s dropping in the sky again. I have every light on already. The door is locked. It’s a huge beast. Surely it can’t get in here.

The city gets quiet at night.