Follow the misadventures of Dan Everton, a night-shift security guard just trying to coast through life. When he’s suddenly afflicted with superpowers, everything goes from mundane to insane in a heartbeat!

Over the course of all five books, Dan gains and loses a crop of wildly disparate superpowers, takes on a variety of challenges and nemeses, and takes more punishment than any person should ever have to deal with. Through it all he keeps his chin up and his wits about him, such as they are. With the backing of his friends, Dan attempts to stay one step ahead of his constantly changing problems while trying to figure out who’s behind it all.

Strap in for this rollercoaster ride of highs and lows, superheroes and supervillains!

Get the digital Omnibus here, or purchase each book separately, below!

Dan Everton’s goal was to coast through life. His slacker security job paid the bills, and although nothing was ever going to get better, at least it wasn’t going to get worse.

Or so he thought. Suddenly, Dan’s become the recipient of intermittently occurring superpowers, and things have gotten much worse. With each new power comes a new antagonist intent on destroying Dan, with no concern for any collateral damage that might occur.

Some people are born to greatness. Some have greatness thrust upon them. And some are dragged into it, kicking and screaming the whole way.

Life’s rough out there for a superhero. 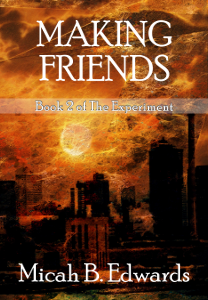 I kind of want to start this story with, “So here I am, surrounded by fire.” It sounds tough, right? You don’t get to be surrounded by fire if you’re just some office drone. You’ve got to be doing exciting stuff—if you want to be telling the story afterwards, anyway. And here I am, so obviously exciting stuff was the order of the day. But there’s a lot that happens before that that’s important, and a fair bit afterward, too. So I think I’ve just got to get to it in order.

So begins the second book in the Experiment series! In the first book, The Reluctant Superhero, Dan was a slacker security guard with superpowers forced upon him. Just as he was reluctantly coming to accept them, the whole thing came to a head and the powers vanished as quickly as they’d come.

Now, freshly re-employed at a burger joint, Dan’s getting his normal life back on track — right up until new powers come crashing back in, and a new nemesis shows up to wreak havoc.

Dan just wants to flip burgers and stay out of harm’s way. Harm, however, has other plans for Dan. And Dan still doesn’t even know how or why any of this is happening! Superpowers need to come with an instruction manual. 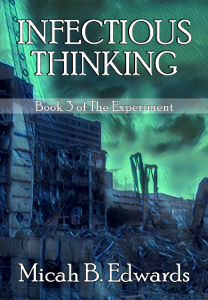 Dan Everton wanted nothing more than to slack off and coast through life in his dead-end, pays-the-bills job. Unfortunately for him, all that changed when he suddenly began manifesting strange superpowers, each one accompanied by a new nemesis bent on his destruction.

Now, in the third installment in the Experiment series, Dan faces his biggest threat yet. With enemies coming at him from all sides, Dan has to manage to keep his cool, keep his sanity and keep his job, all at the same time.

Meanwhile, Dan has yet to figure out who’s causing all of this to happen to him. Will he finally get a peek at who’s controlling everything behind the scenes? Or will he succumb to this latest nemesis first?

Dan Everton wants nothing more than to be a normal guy slacking his way through life. Unfortunately, he’s been picked as the unwilling recipient of intermittently-occurring superpowers. As if that weren’t bad enough, each time he gets a new power, a new nemesis appears with powers of their own.

In the fourth book in the Experiment series, Dan’s hot on the heels of the guy who inflicted these powers on him. He’s determined to bring him down once and for all and restore normalcy to his life. But is the mysterious scientist behind this still playing Dan for a fool? 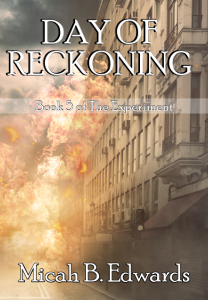 Jail’s a low point for anyone, but especially for a superhero. Once, Dan Everton was just your average night-shift drone trying to get through life with a minimum of fuss. Then he had superpowers thrust upon him, and found himself unwillingly dragged into the life of a superhero — with all of the turmoil and fighting that implies.

In the fifth and final book in the Experiment series, Dan’s finally finding himself toe-to-toe with the man who’s been pulling his strings this entire time. But with the deck stacked against him, can Dan possibly triumph?